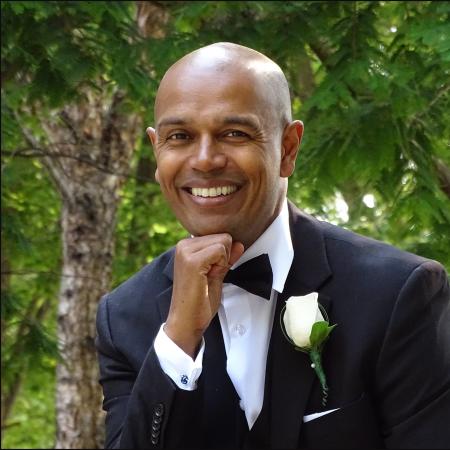 There are so many cross-cultural relationships in Toronto. I think trying to learn your partner’s native language and culture is an amazing gift to give them and their family.

For Thomas Ponniah, learning Farsi was a romantic gesture—a wedding gift to his wife. However, the fringe benefits have been exponential.

“My wife and her family are Persian, and when they interact with each other, they speak Persian. My background is not Persian, so I felt it would be nice for them if I could speak their language” says Thomas. “At dinners or events, they would speak English for me, but it wasn’t their natural language. There is so much more emotion and feeling when you speak your native tongue.”

Thomas’ wife Afsoon was born in Iran, and came to Canada as a refugee at age four. Today, she is refugee rights lawyer.  “When we were discussing getting married, I spoke to Afsoon’s parents. I said I want to study Persian, and that it was important to me to teach our future children Persian as well.”

After the wedding, Thomas stuck to his promise, and began studying Farsi at SCS. “Choosing SCS was an obvious choice. I didn’t want a tutor; I wanted to learn with other motivated students, and felt confident about the quality of instruction I would receive at U of T” he says. “My classmates were really committed, and they pushed me to be a better student.”

In fact, Thomas, who is a philosophy professor, found being in the role of student instead of teacher was very eye opening, and enjoyed learning from his instructor Alireza Bahrani, who won an SCS Excellence in Teaching award in 2017. “When you learn a language, you are witnessing a pedagogy. Watching how Ali taught was really inspiring. He teaches how to love a language. Ali encourages us to be enthusiastic, because he is enthusiastic! He brought in poetry, songs, and music videos to engage us in a more multidimensional way,” Thomas notes. “I’m normally in front of the class. Now, I have a better understanding of the learner experience, which has improved my teaching. You could say my goal was romantically inspired, but my craft has also benefited from learning at SCS.”

Another benefit has been his newfound ability to engage in Persian culture, and the Persian community here in Toronto. “There is a large, vibrant Persian community here. My beginner language skills allow me to engage in a new way. I have a fresh perspective and appreciation for the food, culture, and media” he smiles. “When you know a language, you start meeting new people in coffee shops, taking transit, wherever! Today, I feel a greater connection to Persian society.”

After completing his first Farsi classes, Thomas told his in-laws at a family dinner to only speak Persian, forcing himself to learn, engage, and show off his new skills. “Every now and then I would pipe in with a phrase. Sometimes that was ambiguous to be safe” he laughs. “But I was participating, which was great.”

Thomas’ goal is to continue taking Farsi courses at SCS, and would recommend the challenge of learning a new language for love. “There are so many cross-cultural relationships in Toronto. I think trying to learn your partner’s native language and culture is an amazing gift to give them and their family” he says. Thomas also admits that learning a new language requires the ability to let go, take risks, and not take yourself too seriously. “Right now, most of what I say in Farsi is fairly mundane. As a professor, I am used to knowing the most, but it’s very helpful to know the least in the classroom” he says. “Learning requires emotional and mental flexibility, to be comfortable being uncomfortable. Essentially, in class we all have to get used to laughing at ourselves while pushing ourselves to learn. It has been a great experience and I look forward to continue developing my ability to speak, read, and understand Persian.”